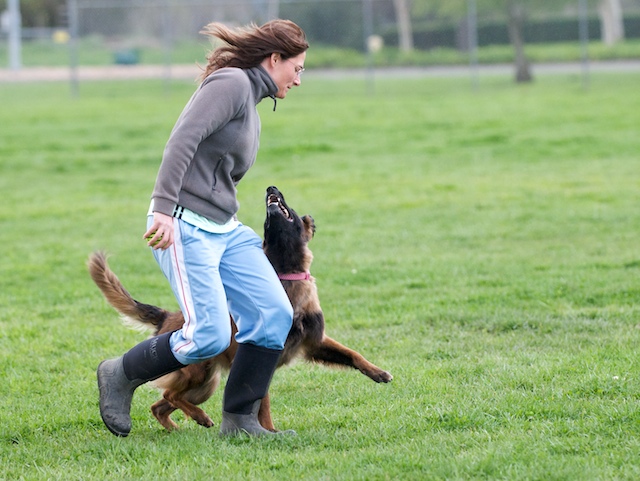 How was it possible that I, queen of goals, could have been running for close to a month without ever having measured out the distances or hopping on a scale? When had this change come about?  Once the question entered my head, it became something of an obsession

For most people, recognizing that you’ve changed with time might not be such an earth shattering moment.  But for me, a person who had lived life from goal to goal, it was extraordinary. You have to understand, I wasn’t just a little goal oriented; I went through life setting goals to be the strongest, fastest, smartest, and most productive individual in any sphere.  How I felt about myself at any given time was to a large extent a function of how successful I was at achieving those goals

This strategy worked well for me.  I went to college so I could start a career.  I purchased a puppy, specifically with the intention of returning to the dog sports where I had earned titles and minor awards as a teenager.  I focused on exercise and physical fitness with the goal of competing in events.   As I moved forward in life, I chose to return to school to earn an advanced degree.  Eventually I completed school, started a new career, got married and had my first baby.

By good luck, I was offered a chance to train dogs a few hours a week (for money!).  Making money to pay the babysitter gave me a few hours to work with my own dogs.  For my self-esteem, I needed that; to earn titles and maybe even get some accolades for what they were accomplishing.

For the next couple of years I trained dogs professionally, and eventually became good enough that I had more work than I could handle in my part time working hours.  When my husband found himself unemployed after Sept., 11, 2001, he jumped at the chance to become a stay at home dad – he had missed watching his son’s first years of life.   I was now free to pursue life as a dog trainer or to return to my original career. I chose dogs.

I trained more dogs and started teaching seminars to help other people train their dogs.  My work gave me the opportunity to observe training methods and the results achieved.  I developed a picture in my mind of beautiful obedience; a picture based on the joy of working as a team rather than scores, titles or externally measured goals.

As the picture became all consuming, reaching that picture became the goal – a goal tightly intertwined with the training method and philosophy.  Training for partnership and mutual joy created endless possibility for new and more thoughtful training; it took over my heart and soul.  I began thinking in terms of helping each team I coached develop a strong relationship with their dog while at the same time providing the needed technical skills required for high scores.

My learning curve accelerated as I contemplated new solutions to common problems, and my love of training, as opposed to competition, escalated along with it.  I had landed in the most fortunate of positions; my passion for dogs, creative thought, problem solving, and teaching had merged my working career and my personal life.  The goal of training became the journey; each title earned with a willing and engaged partner became a validation of the method. When I earned my Obedience trial Championship and Schutzhund titles using motivational training, I found myself celebrating the success of the methods rather than the title.

As I ran on the trail today, I realized that my changed beliefs about what I value in dog training has also changed what I value in life.  I’m less interested in concrete external goals, and more interested in how I’m feeling about what I’m doing.  I’m finding myself endlessly excited by the opportunities to learn, teach, and explore, working through the journey rather than reaching a destination.  And on it goes, through my parenting style to the choices I’m making in daily life.  Somehow it’s just not so important anymore to know how fast or how far I’ve run.   In the end I’ll reach my destination; I have a picture in my head of what I want to achieve.

I’m about to start a new adventure in my own life – I’ll bring home a puppy in a few weeks.  This will be my first new puppy in seven years; I’m both terrified about integrating a new puppy and overwhelmingly excited about trying out some new ideas on a fresh slate.  Lord knows I’ve made mistakes on the dogs I have now, and I’m ready to try and do better.

What is it that I want now?  To learn.  To improve my skills and to explore new ideas.  To train better and smarter. To develop the strongest relationship I’ve ever had with a dog.  To create the most beautiful picture of teamwork, precision and joy in the work that I can master.  Seven years is a long time to think about “what I would do if I could do it over”.

I hope I’ll have company.  I look forward to your thoughts, comments, and support.  What I ask of you…remember it’s the journey rather than the destination.  Let’s learn what is possible, what matters, and gather information from each training session.   Cheer for our good days and accept the bad ones –  it’s a journey, and in the end it’s going to turn out fine.

Welcome to my blog.  I look forward to meeting you.

If you struggle with getting a release off of toys or bite objects, or if you just want a sophisticated look at a dog‘s motivation around toys via fight, possession, prey (chase) behavior, and getting cooperation (release or toy return), watch this video. Obviously,...

END_OF_DOCUMENT_TOKEN_TO_BE_REPLACED

I know, I said I'd do a better job keeping up my blog.  What can I say?  I suck. Anyway, Xen is coming up on his one-year birthday!  He's making really nice progress in his training.  The following video shows training for "object guard". His job is to prevent me from...

END_OF_DOCUMENT_TOKEN_TO_BE_REPLACED

I haven't written on my blog in many months.  What happened?! All is well! I stopped running day-to-day operations at FDSA, and that freed up time to do what I am seriously passionate about - education.  Free education, for the most part, because I spend a very high...